What are Resolution and Aspect Ratio, and why are they important for Video Cropping, Reframing and Resizing?

☕️ TL;DR - Resolution is determined by the dimensions of a video, while Aspect Ratio describes the proportions of those dimensions. Custom Cropping, Custom Resizing, and Custom Reframing benefit from knowing these numbers. 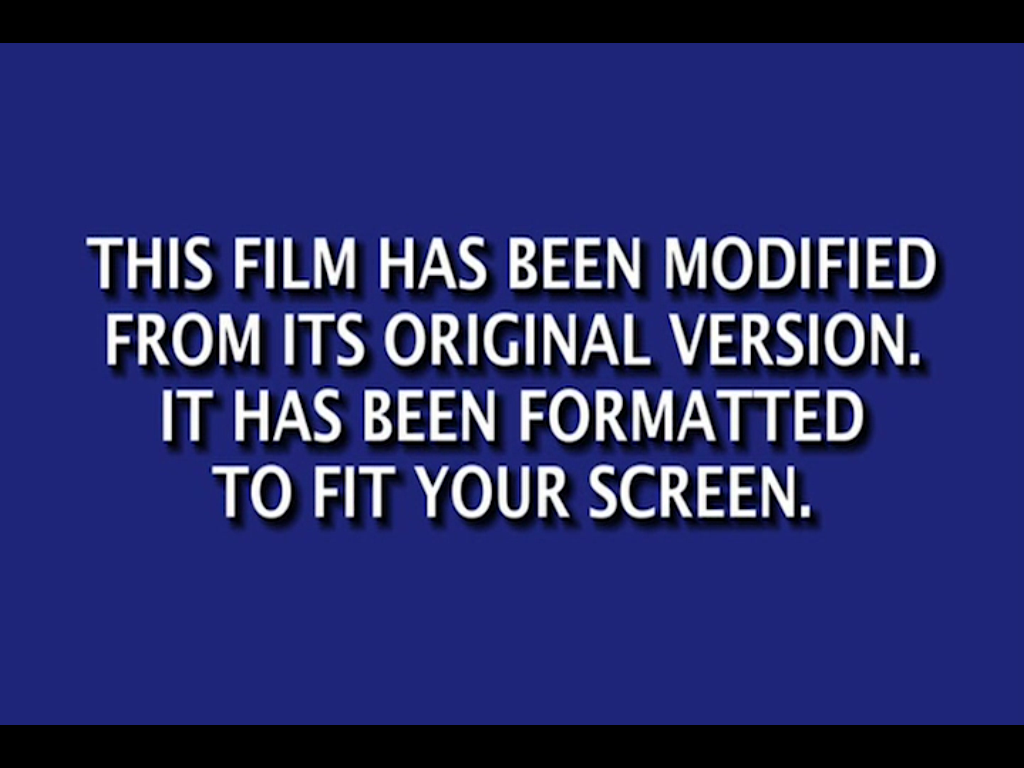 These big ugly notices used to show up on TV screens before every movie. You may still see them on airplane screens before the usual movie intro. It's a reminder that reformatting films and videos for different sized screens is not a new challenge. With vertical video, it's just a harder one.

Resizing and Cropping videos for apps like TikTok, Instagram, Byte, Triller, Snapchat, Facebook and many others is a critically important job in video production, social media and content marketing. In this article, we dive into how it works and how Kamua can help you figure out how to get maximum screen space for your videos. Using Kamua, and knowing a minimum about Resolution and Aspect Ratio for Digital Media, you can easily convert a Landscape (1920 x 1080 | 16:9) news segment into a Full Screen Vertical Portrait (461 x 1000 | 9:19.5) video. This journalist would not have to re-record this segment to put it out onto TikTok, Instagram Stories, Snapchat, and many other apps.

What We Will Cover

📲 Even if you film your videos in vertical portrait, you need to know how videos are displayed when shown full screen.

If you already know everything about Aspect Ratio, Screen Size and Resolution in digital and mobile video, head over to the article on Project Settings

to see how you apply them in Kamua, including how to set and apply your own Custom Aspect Ratios and Custom Resolutions.

🐿️ In a Nutshell:

The Dimensions, in pixels, are:

The Proportions of those Dimensions are:

You can easily figure these Proportions from the Dimensions by dividing each Dimension by the same number, preferably one that leaves whole number answers.

[Note: we shrank the image to fit it next to the text on this page, so we are referring to the original dimensions.]

The next thing we must know is that the screen of the iPhone X is not 1080 x 1920 pixels. If it were those Dimensions, the form factor would look pretty old school. What do you notice first?

Both the dimensions and the proportions have changed pretty dramatically. And that changes your editing choices as a video editor, content marketer, social media manager, fan engagement manager, producer, vlogger, journalist...every kind of visual storyteller needs to know these dimensions.

Because that first number, 1242 (the width of the phone screen), is bigger than the 1080 width of the video, the original video is going to be displayed in bigger dimensions than 1080 x 1920, right? Otherwise you would have a box around it to fill in the empty space on the screen.

If you kept the height at 1920, but increased the width to 1242, you would end up stretching and distorting the image.

The answer is that the new height that preserves the 9:16 Aspect Ratio is 2208 pixels.

So, the Aspect Ratio of a full screen video on this phone is no longer 9:16, but it has changed to 9:19.5 because it has been cropped. This is a pretty big deal. 270 pixels of content was trimmed off the sides of the video by the app, not by the content creator.

✅ Sanity Check: 19.5 is "taller" than 16, so that matches up with the idea that phones are getting taller.

iPhone X compared to the original iPhone (2007). Note that the width of the phone hasn't changed much, and that's mostly down to the fact that human hands have not yet evolved to hold wider phones.

And we know that folding phones are going to be a thing in the future, when the technology matures and the prices come down. So there will be all kinds of new cropping requirements for the apps on those phones.

How Should I Crop My Videos For TikTok?

TikTok is the most popular video discovery and sharing app on the planet. The more content you put into TikTok, the greater the chances that the algorithm will find out what works about your content and show it to people who like it.

💡 Pro Tip: You can use Kamua to make multiple versions of your videos to test which versions work best in different apps at different times of the day.

TikTok also uses the entire screen to show you videos and on many newer smartphones, that Aspect Ratio is likely to be 9:19.5, depending on phone screen size and the app interface.

So, when you are shooting and cropping videos for TikTok, you need to consider how the audience is going to see your video. Keeping your subject in the center of the screen is really important.

You will also need to take into consideration the User Interface (UI) in any app and make sure that none of the key UI buttons and icons cover up a critical piece of your video.

We'll be publishing a full guide on our blog to cropping different styles of video for different vertical apps.

Landscape 101: And What About Widescreen Videos?

If all of this is still a bit confusing, that's OK. Video is pretty complex stuff.

Let's look at some other examples and understand Aspect Ratios and Screen Sizes more fully, including decisions around cropping content for widescreen displays, and cropping widescreen content for mobile displays.

This is basically what your HDTV would look like if it were a giant iPhone X. In other words, the iPhone X is not a mini HDTV flipped on its side. TVs are generally set up to be in the 16:9 Aspect Ratio, which makes sense because TVs (mostly) do not get flipped around for viewing videos (Samsung Flip TV being one exception) and they are getting big enough to the point where the black bars we see above and below widescreen ("cinematic") movies don't bother us as much as they used to on smaller screens.

But, smartphone dimensions are changing all the time, as we have seen.

In an app like YouTube, the white zones on either side of the 16:9 video above would be "black bars" that are put in place by YouTube's app in order to display the video without altering its dimensions. If you zoom to fit the video full screen, the video ends up being cropped.

This is the exact same treatment we discussed above with the full screen cropping for tall displays. When the same "tall" phone screen is turned sideways - horizontal - it becomes a widescreen display.

Let's take a look at video Resolutions on YouTube and then consider how we should crop videos for:

YouTube video sizes are expressed in dimensions, which we simplified earlier as Resolution.

As we saw, the iPhone XS Max has this display:

It's a lot of pixels (3,388,496!) capable of displaying a 1080p Full HD video, but it's not a 4K TV because it's not reaching close to 4,000 horizontal pixels (when turned sideways) and it doesn't have 2,160 pixels vertically either (still turned sideways), it has 1,242. So if a friend sends you a 4K video to watch on your phone, your phone's software is going to adapt the video to your screen dimensions, aka Resolution.

When you consider how small an iPhone XS Max is (6.5") compared to a 4K Television (55-120"), it's pretty impressive how dense the pixels are on the phone's display.

😎Cool factoid: When YouTube launched in 2005 it only offered 320x240 resolution

As we know from the previous sections, that is because the Aspect Ratio is the proportion of the 3840 x 2160 dimensions. We divided both numbers by 240 and ended up with 16 x 9.

So,1920 x 1080 is a ratio of 16 units to 9 units, and, as you've probably noted, all of the dimensions in the YouTube Video Sizes graphic are the same approximate Aspect Ratio of 16:9.

This (16:9) is the typical "Landscape" Aspect Ratio and we already know the typical "Portrait" Aspect Ratio is 9:16 because the canvas is flipped on its side. You could say that the French artist, Claude Monet, painted in many different aspect ratios.

Landscape Aspect Ratio (16:9) most likely comes from painting, because most of the time you would use a wider horizontal canvas to paint a landscape, rather than a narrow vertical canvas. That's why shooting volcanic panoramas in Iceland should probably not be done holding your phone vertically when you can turn it sideways (or use panoramic if you have a steady hand).

You would use a narrower portrait canvas to paint a portrait of a person and you would probably hold your phone vertically to record a video blog ("vlog") from Iceland if your followers cared more about your face than about the landscapes from your trips. Alternatively you could use a GoPro and just crop it later in Kamua. Kamua is built from the ground up to help you do something that really boils down to a simple maxim:

Shoot Once. Crop for Purpose.

How Do Aspect Ratio and Resolution affect my Cropping choices?

As we saw right at the beginning, the challenge of display size and ratios is nothing new.

Hollywood directors who shot their movies in the 2.35:1 widescreen Aspect Ratio were often horrified at the idea that they would lose half of their image when the film was cropped for TV.

For most of the history of TV viewing the standard Aspect Ratio was 4:3. The technique that was used to crop film was called "Pan and Scan." Modern technology allows us to replicate that cumbersome and complex process using a combination of web browser interfaces, smart software design and the incredible capabilities of Artificial Intelligence and high-speed cloud based Graphic Processor Units (GPUs). The legendary director, Sydney Pollack, was clearly not a fan of showing films on TV. Many content creators have similar opinions about cropping their landscape content for vertical portrait display on mobile apps.

And it is an unavoidable situation that up to 80% of widescreen videos get cropped away when the content has to be reformatted for vertical portrait.

Imagine cropping this dramatic landscape for vertical portrait. Because the scale of video subject - the natural wonder - is what makes it unique, being restricted to showing only a small portion of it becomes almost pointless.

But, most vertical video content is not about landscapes!

Cropping Landscape to Vertical and Fullscreen Vertical in Kamua

Let's go back to our video example from the beginning of this article. It was a girl with a cello and

we were looking at how popular full screen vertical/portrait mobile apps like TikTok would end up cropping the video into a 9:19.5 Aspect Ratio for a large portion of smartphone users.

Are you surprised that the original video is actually from YouTube and in a 16:9 Aspect Ratio? To quickly see how landscape format videos will look in a vertical app, using Kamua we can quickly apply AutoCrop and a 9:16 Aspect Ratio to see what choices the AI has made.

AutoCrop quickly establishes the focal point of the video, and it works nicely for (9:16): But, we also want to get this to fill up the entire vertical portrait canvas available to us on newer smartphones and apps, so we're going to apply a 9:19.5 Custom Aspect Ratio.

🚦Heads Up: You need to input your Custom Aspect Ratio as a whole number, no decimals. The easiest way to do this is multiply by 10. You will then see the crop preview overlay change to indicate the new dimensions for a full screen mobile crop (90:195 or 9:19.5).

Done! You know the basics - and a bit more - of how to crop for vertical full screen for modern mobile phones.

To apply these learnings to make widescreen videos that take up the full screen when the phone is turned sideways, all you need to do is flip the Aspect Ratio and the Resolution around:

Proportion is a Ratio. Size is Dimension or Resolution.

To apply this knowledge, go to the Project Settings and get started.